If martial arts is an art form, then Kumite is the tools of the trade and Kata is the freestyle. And it was precisely these tools that were the focus of an exciting course in Bad Bentheim. With Olaf Bock. With a little sweat and concentration. And with a lot of art! ???? 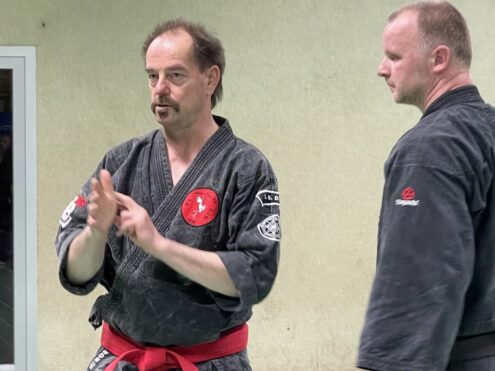 Kumite is the collective term for any kind of physical confrontation, from the agreed one-step fight to much more complicated multi-step sequences of movements with alternating attacker and defender to free fight without any agreements at all. In most Kempo schools, one-step fighting (Ippon Kumite) and free fighting are taught. In Shorin Kempo Ryu there is also the Kaeshi kumite, where it becomes much more complex. And there is Kumite with and without weapons.

So we dragged not only us, but also the Bo with us to the sports hall at the foot of the mighty castle of the Bentheim Counts. And were initially amazed at the response, because there were 21 participants from very different styles, who had followed the invitation of our Kempo friend Thomas Kuclo. This promised to be cozy when the long wood comes into play.

But first we started with a classic warm-up. The hall was heated. A luxury that we in Kalletal currently no longer know. Accordingly, we were quickly at operating temperature and were then taken by Sifu Olaf in the world of Kumite of Shorin Kempo. As already written Kumite are not foreign to almost all martial artists. But of course, the techniques are always rearranged, so that it was first of all about learning the pure procedures. 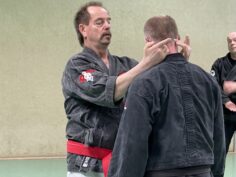 And anyone who watched Sifu Bock quickly realized that it was not just about the sequence of block and counter, but also about the flowing, supple connection of these elements. Once again, I was and still am impressed by how strongly the techniques refer to their origins in the Southeast Asian regions. For the most part, confrontation on a direct, hard line, as often seen in Japanese styles, is avoided. Instead, it goes into forward or backward evasive movements, with footwork usually oriented in a triangle. The Kake Dachi, also seen so often in Silat, is also often used here to “flow into” the next counter.

Well, the “flow” requires a little practice. Or a little more practice, depending on your talent ???? Anyway, after just under two hours, a handsome 7 kumite were already taught and diligently practiced. It is nice that you can practice most of these partner exercises in one go, so in one continuous movement. In total, the Shorin Kempo system knows 20 of these Kumite, which will spread in the course of the next years also in the Kalletal!

After a short break it went to the long stick and its handling with partner. Again, it was amazing how easily the wooden bump dispenser flitted through the hands of Sifu Olaf. Again and again Thomas was (or had to be) the victim of the counterattacks. The movement principle remained the same: dodge with minimalist movements and counter with a short rotation maximum hard. This form of weapon-based Kumite was this time also new for Andreas and me. We know in our original style only two longer defense and attack sequences with the Bo. Accordingly, we went to work cautiously.

After almost four hours and five more kumite, this time with Bo, the glory under the castle was then already over. Injured there were despite the narrowness none. But new impressions for it all the more. And a whole new set of Kumite, which the old and original Shorin Kempo has to offer for us. Now it is a matter of internalizing what we have learned and filling the sequences with life and combining them with suppleness. 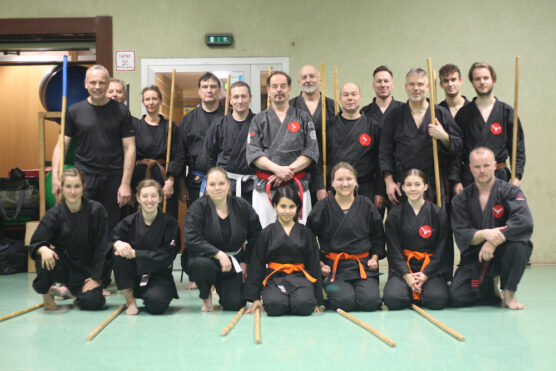 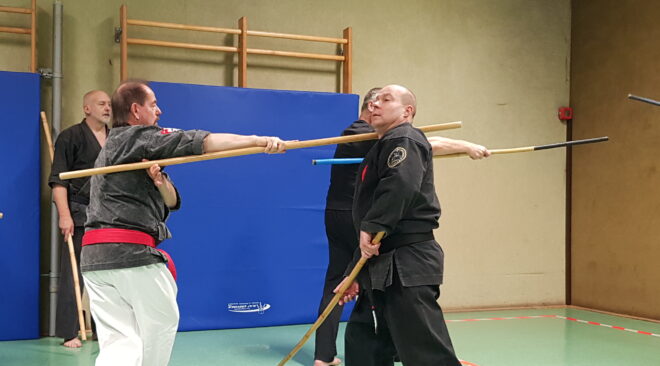 18 Nov at 9:18
0
If martial arts is an art form, then Kumite is the tools of the trade and Kata is the freestyle.… 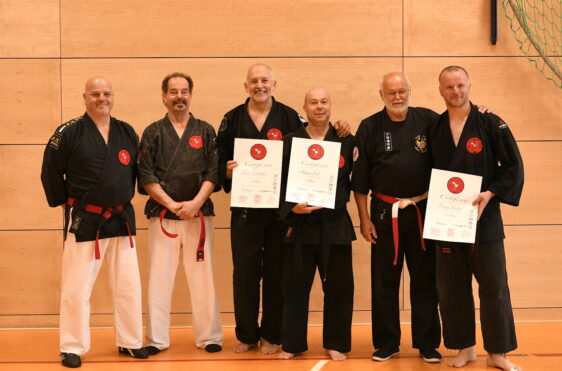 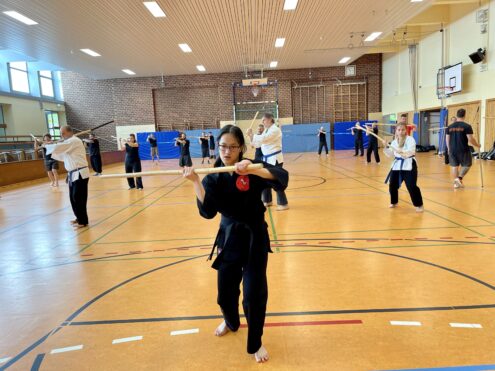 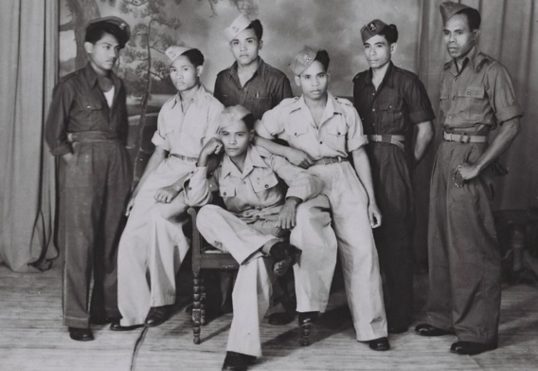 12 Apr at 8:23
0
Shaolin Kempo is an eventful piece of colonial history! Who deals with the background of our martial art, quickly comes… 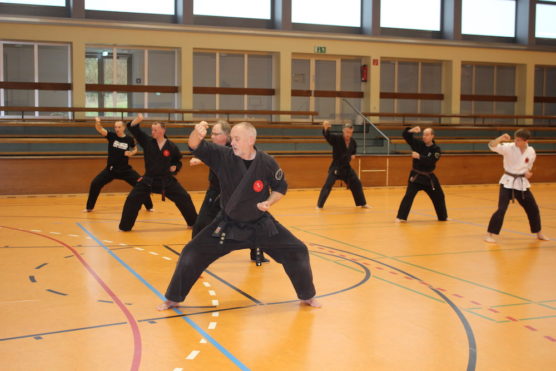 21 Jan at 16:16
0
The “wrong” Kata: The fourth and the fifth Tai Tsuku are classically the upper level forms in Lung Chuan Fa… 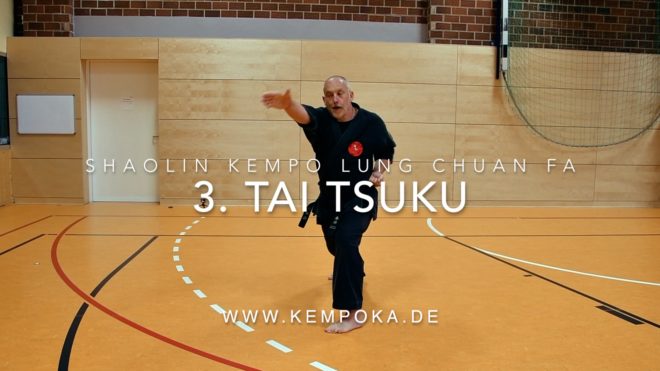 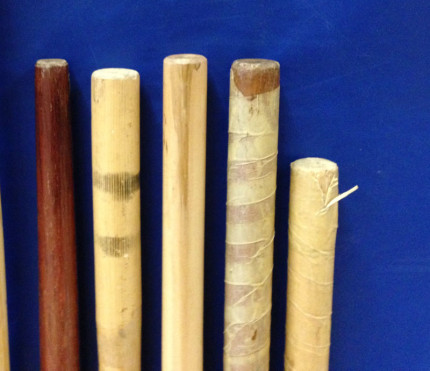 19 Jan at 13:27
0
The Bo is the ultimate all-purpose weapon in Kobudo, but also in Kempo. Therefore, it is worth taking a closer… 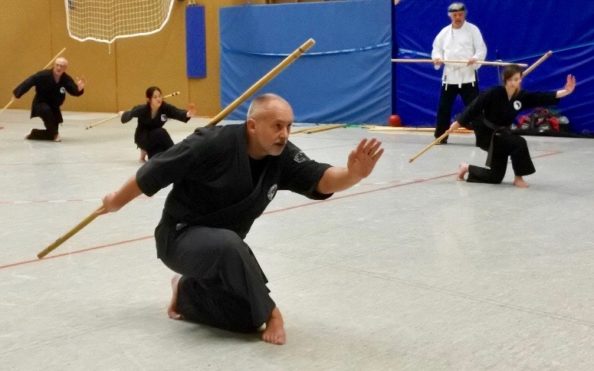 18 Jan at 14:28
0
The long pole, Bo (Japanese) or Gun (Chinese) is the first and central weapon taught in Lung Chuan Fa. Probably… 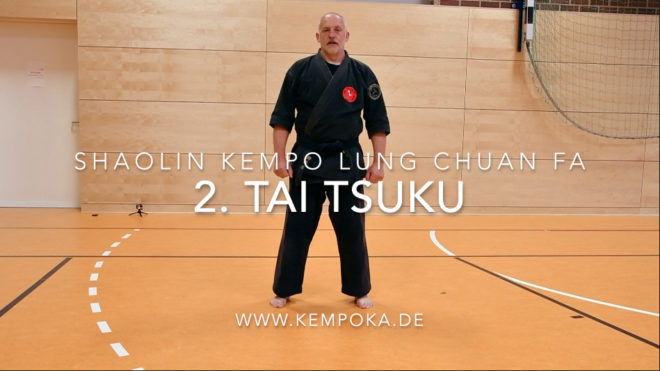 14 May 2020
0
The 2nd Tai Tsuku already makes higher demands on the Kempoka, although it is still one of the short kata… 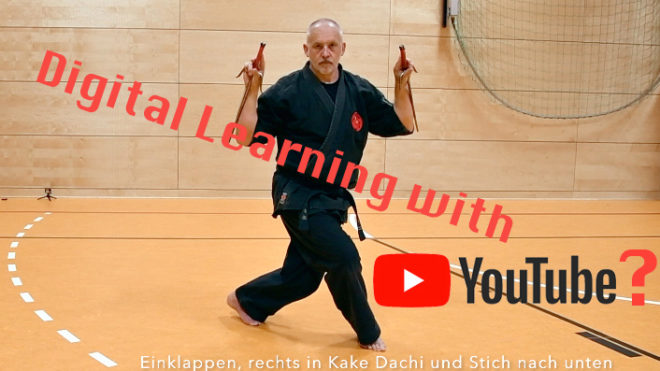 12 May 2020
0
Can you really learn martial arts with YouTube? Hm, actually I have a pretty clear opinion about that: Nope, I… 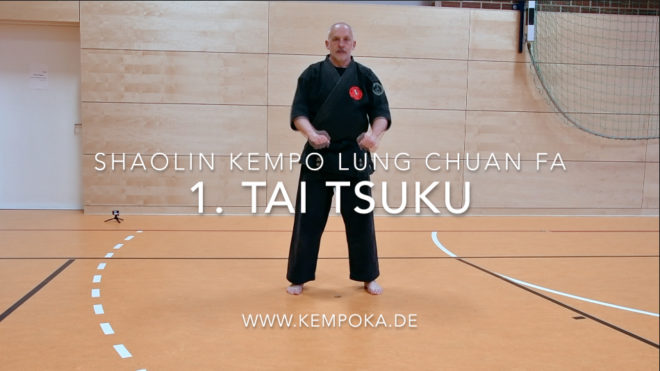 1 May 2020
0
The first Tai Tsuku opens the door to Shaolin Kempo, at least according to my interpretation. In the style I… 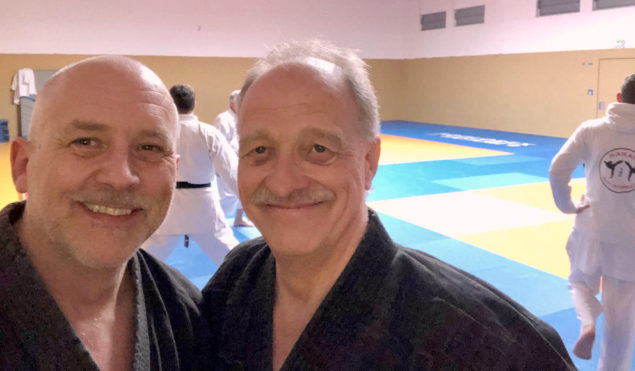 8 Mar 2020
0
Our entry into the German Karate Federation was a bit bumpy, as it was initially influenced by petty vanities of… 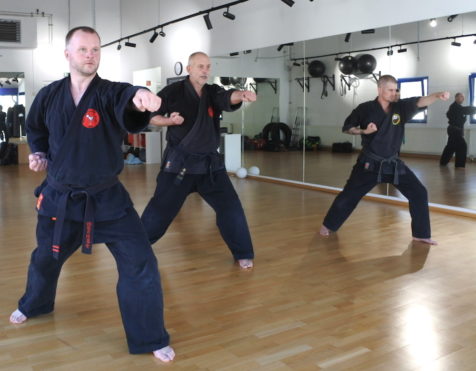 21 Feb 2020
0
“I cannot graduate higher than my sensei.” When it comes to his principles, Olaf Bock is very consistent. And loyalty… 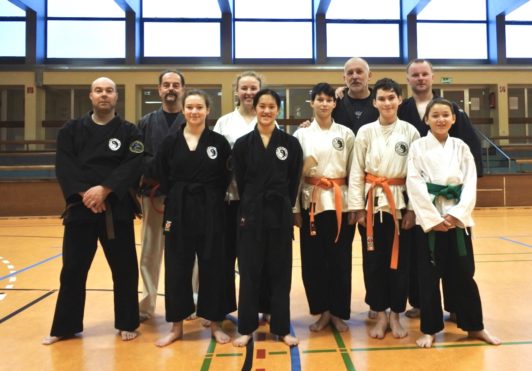 8 Dec 2019
0
It’s amazing how time flies. Almost exactly one year ago I could lure Sifu Olaf Bock to Kalletal for the…

21 Oct 2019
0
Last weekend I was (once again) out and about in martial arts. This time, however, rather to meet organizational hurdles…
Menu