From trainer to master

What am I – a student? – a trainer? – even a “master”? I don’t know how other martial artists feel when they stand in front of a group of students. But I often question my actions and my position.

This is of course helped by the fact that I myself am constantly in the role of a student. When I travel to my sensei Olaf Bock, I often have the feeling of being a Kempo goof. When I train with my Silat master Niki, I am amazed at his patience with me. And when Alex has me in Silat training, I run out of breath so fast that I always make a firm resolution to add another shovel of endurance training.

Why I am a student 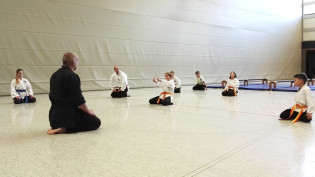 So I’m a student. Which means that when I teach students, I am always critical of my actions. So I feel anything but sovereign, because my Kempo is subject to a constant change in which I also let my students participate. I deal openly with the fact that I am in the middle of a process, not least because of the training with Olaf Bock and the occupation with silat.

When I stand in front of a group of students, which is the case at least twice a week, I see myself as an entertainer and trainer. The people / children come to let off steam. Or to exercise themselves physically. To them I have to offer animation, present a hopefully coherent training concept and make them feel good or sweat a lot – preferably both. Participate, suppress your own panting as much as possible and always have an answer to your questions.

If we go deeper into the martial arts, I hope that I can do justice to the role of a trainer. I see this as someone who can think outside the box Who can individually recognize the strengths and weaknesses of his students and can respond to them. Who supports his students, if they want to. Who spurs them on, but can also let go sometimes. And who can communicate and teach himself and his actions as convincingly as possible. And that with a certain sustainability. Trainers bring out students who outperform them. This includes a certain amount of vanity. But also the certainty of having internalized your martial art in such a way that you can stand firm despite all your weaknesses and not let yourself be led astray. I learn in every training also for myself – so I am actually taught by my students.

Why I am not a master

I’m not a master. For one thing, I am at home in a martial art that has no rigid curriculum. Learning, checking off, testing and then continuing – that’s just not how Shaolin Kempo works. It is too alive for that, there is too much to discover. Even though the traditional greeting is called “sensei”, I don’t feel like one.
The 2nd DAN marks me only as an advanced student. The technical program of the Lung Chuan Fa becomes complete only with the 3rd DAN. Only after that do further master forms follow, which remain a constant challenge, regardless of the DAN level. Not only because of my graduation I am far from being there, especially by processing always new influences. “My” style is far from complete, and I am a very imperfect student and anything but “finished”.

And then I understand the term “master” in the martial arts, that is Sensei or Sifu, rather as a title of honour that my students give me. A Sensei is much more than just a trainer who trains push-ups or Kiba Dachi. Much more than someone who can show the bunkai of a Sifat. A Sensei helps and supports his student in a way that helps him in real life.
There is a level swinging along that goes far beyond the common sweating and panting on the mat. Trust, respect, but also affection – elements that have little place in the broad sports training concept of sit up and push ups. Something like that has to grow and is also little influenceable by myself. No wonder that most styles are pure family styles – like the original Kuntao Matjan by Carel Faulhaber, the root of our Shaolin Kempo.

The people I have met as real “Sensei” in the sense of martial arts have always given me more than just training instructions. And this is not meant as a transfiguration of some far eastern wisdom. I have had the great pleasure of training with really great people and great athletes. …who are unparalleled in their martial arts. But they do not become my sensei. An example: Maul Mornie is already a Silat legend and I was allowed to attend some seminars with him. But my “teacher” is Niki Sandrock. Because Niki shares his knowledge, his insights, his passion of martial arts with me. This has shaped me extremely in the last years. At the same time Niki would hardly call himself my “sensei”, he takes himself far too much back for that.

The same applies to Olaf Bock. Olaf brings his disciples closer to his understanding of Shaolin Kempo in a very unpretentious, yet clear and direct way. Although he also speaks of himself as a “seeker”, he conveys an extreme sovereignty and security. High technical skills and a personality flow together to someone I can call “my teacher”. This is a very individual decision that I have made for myself.

A sensei, a master, is not by graduation. but by the consideration and respect of your students.

So, enough of the wisdom, now it goes to Sensei Olaf Bock, who wants to bring the Sifat closer … ? I hope you enjoyed the lines!