DAN 2: There you go. That worked. The exam for the 2nd DAN is done. And the second strip on the belt can be sewn on! Yipppieh (you can be a little happy, can’t you?). For months I have been putting in additional trainings, have been to seminars on the weekends and have been with Sensei Olaf Bock again and again. Five training sessions per week in the gym, plus practice practice practice practice practice at home – a tough workload for a amateur athlete.

My partner and friend Uwe and I didn’t make it easy, but the preparation was necessary. The program at the Lung Chuan Fa is simply huge. And the exam was not easy.

Here’s how the test went

In the week before April 13th I had only relaxed training. Save grains. Just don’t risk injury. Why I injured my knee on Friday right before the exam, of all days, and I don’t know. But what I will not forget so fast is the night to Saturday. At 2 o’clock I finally got up and took some painkillers to be able to doze at least a little bit. Well, that promised to be a great exam. It was way too late to cancel it. So eyes closed, ibuprofen and adrenaline will do the trick…

With sleepy eyes, thick knee and slowly rising nervousness we went off to the hall. Since the DKV examiners wanted to meet for a meeting beforehand, the exam did not start until 2 pm. Instead, however, with a record number of high-ranking DAN bearers. Joachim Weduwen and Manfred Patan (both 6. DAN) from Nordhorn, Klaus Rennwanz (5. DAN) and Sergej Lang (3. DAN) from Sigmaringen and Joachim Hölscher and Manfred Inoue (both 4. DAN) from Wesel Büderich. Also not exactly the frame in front of which one presents oneself relaxed and easygoing. But a worthy setting for the more than 3.5 years of training between the two DAN exams. ?

Well, and then we started getting nervous. Very nervous, in fact. I don’t know if the pain pill I had just taken made me dizzy, but I kept having complete stops and had to start over again several times. But once I was inside, the Tai Tsuku and Saifa were running. Fortunately. Blowing and puffing was part of it for me, but stamina and knees were no problem. We took turns demonstrating our forms. The master forms were really good, the training with Olaf Bock paid off.

Then it was the techniques/kumite. They were also really fun. The adrenaline gave us the extra kick and we really kicked ass. For the examiners I had no view, my focus was on the procedures and my partner. Too bad that neither photo nor film was allowed (why not?). I also thought Uwe was really strong here. I had hardly noticed his forms, as I was dealing with myself.

Then the weapon forms. Also the Bo ran well through the hand. We had practiced it intensively the last weeks. Very nice. Less beautiful, however, was my Sai form. Unfortunately my hands are not quite so dainty. And due to the efforts of the last hour they were so swollen that the Sai forks kept getting stuck while rotating. Annoying, because the kata was going really well in the preparation. And I wanted to show what I’m capable of … The halberd form was good again, even if it was decorated with a second (or two) of commemoration, during which my concentration tore again. But the mini-blackout was easy to dub. 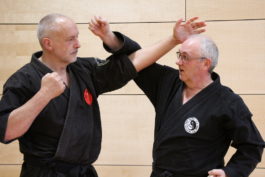 The last unit was then devoted to self-defence. It’s one of my strengths. This was to be carried out according to the wishes of Sensei Rennwanz “true to the self-defence paragraph”. So with the necessary proportionality – a grip on the wrist is not immediately followed by a fist punch or kick. Okay, so more like cuddling for both of us bears. The releases from clutches or strangling were no problem for both of us, we usually practice this during the warm-up. The topic was finished even faster than we thought, stick and knife were not used anymore. What a pity, I would have liked to show a little more Silat technique.

And also the breaking test failed. Allegedly “because of the age”. HELLO!!! I may be an old bloke, but you don’t have to let it hang out like that! ? If there is something I don’t like, then it is an “age-appropriate test”. Well, then we’ll make a round of woodchips in the next weeks and film that for our examiners! 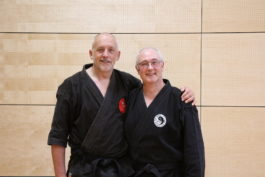 After a good two hours the spook was over – we had expected a longer exam. Both of us and the spectators were complimented out, the examiners wanted to have some time to consult. That dragged on for a surprisingly long time. A good or a bad sign? The tension rose. Finally only Uwe and I were called into the hall. Where we were then told that Uwe had unfortunately not made it. My jaw dropped first. Shit! That I had passed was initially less important to me than Uwe’s emotion. He took it quite calmly, but I know my old buddy. Cheer up, Uwe. You’ll get a second chance.

A belt for the pants

The evening ended with a meal together. The decision for Uwe was hard, but understandable, also for him and both of us. But I only gradually lost the stress. Finally I went back to the gym without any pressure, went to training without any stress, met my Silat-Buddies again – it only slowly seeps into my brain. And today, after three days of rest, my knee calmed down again (today I know it should take months).

The last months were a very important time for me. Actually, they were and are the most important when I think about the DAN exam. Not the exam, but the preparation for it made many things even firmer, made me learn and gave me something new. Therefore, the exam was important for me, but at the same time completely unimportant for my Kempo. In my opinion, that’s exactly what an exam is for – it creates the tension that is necessary in advance to concentrate on one thing. Whether the belt has one more strip and a certificate is hanging on the wall is of no interest to anyone who trains with me anyway. I was nevertheless pleased about the many congratulations! ? 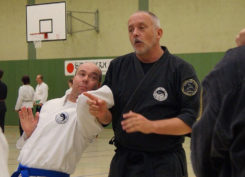 From trainer to master
Menu