Our entry into the German Karate Federation was a bit bumpy, as it was initially influenced by petty vanities of a local functionary. But in the meantime we are fully involved. And therefore I was especially looking forward to participating in a four-part seminar entitled ” Seminar Karate Teacher I”. But it was to be quite different …

The German Karate Federation DKV is by far the largest martial arts federation in Germany with more than 160,000 active members. And the annual four-part seminar “Seminar Karate Teacher I” is one of the most sought-after and high-ranking seminars within this association, according to the association and its members. The program also reads very excitingly. In four weekends, divided according to the elements earth, water, fire and spirit, various exciting topics are dealt with. Above all, several high-ranking representatives of different styles and martial arts come to the seminar and pass on their knowledge, from (of course) Shotokan, over Kyusho, Goju-Ryu, Yoga, Wing Chun, Escrima to Kobudo, Jiu Jitsu and others. All DKV members from 1st DAN on could take part. 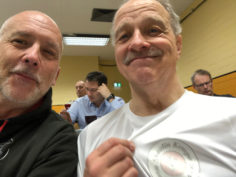 One of the Shaolin monks there

When I heard that my Kempo buddy Joachim from Wesel was joining us, the anticipation was even greater, because the Kempoka from the Lower Rhine is not only a cheerful person, but also a real expert for Shaolin Kempo with more than 40 years of Kempo experience on his ascetic back. He is also the style direction advisor of our small direction in DKV. And one of the two legendary Shaolin monks from the Lower Rhine, as he and his congenial partner Manni are also called.

To cut a long story short: We registered and rushed to Maintal near Frankfurt on the last weekend of February. Not exactly around the corner – but what a lot of things you do to learn new things! 🙂

The seminar leader, Dr. Axel Binhack, welcomed besides us about 25 other active participants from all over Germany, from Bavaria to Berlin and Hamburg. All of them Black belts, many 2nd DAN or higher. Most of them were Shotokan representatives, a few belonged to the Goju-Ryu style, and somewhere there was also a Shito-Ryu representative. Of course we were the only Kempoka. Axel Binhack has been leading the seminar series, which he himself initiated, for 21 years now. The exchange among each other and with other martial arts is their purpose. As described above, it is structured according to the four elements. Axel first explained to us why he follows this division, what it is all about and what are the intellectual foundations behind it. Okay, sounded a little dull at first. Unfortunately, two instructors had to cancel their participation on this first weekend due to illness, so that both yoga on the first day and physiotherapy on the second had to be cancelled. 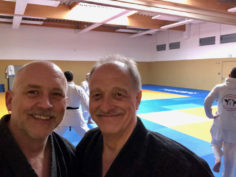 Then we went into the dojo. Wow, here, at the Budokan Maintal, there is an extra budo hall with a fixed huge mat surface. Impressive. Short warm-up unit, then we started with the practice. Well, first of all with movement sequences from a Shotokan Kata, by means of which Axel, himself a 6th DAN, tried to explain the different principles of earth, water, fire and air. Hm, you can go like this. But since I had asked specifically beforehand whether the course was only for Shotokan-Karateka, I hoped after the first introduction for then following style-independent examples.

The morning went fast, after the lunch break another theory unit followed, but I found it not very inspiring. Well, maybe I’ll be addicted to the Eurasian cocktail of elements even later. Afterwards we went back to the hall, I was looking forward to a good round of Jiu-Jitsu. The speaker Stephan Wolf is an old warhorse who has been accompanying the seminar series since the beginning. The 7th DAN had a top athlete from his own school with him, who was his partner and co-lecturer. They were also very good. But what they showed was a little bit less. Really? Simple Fall School? And even then, most of the karateka were standing next to them in amazement. Comments like “well, I don’t like falling” came up. Did you see it in the execution. But martial arts without traps? And then the avoidance and lever techniques! I can’t stand wrist-tilt levers or Z-levers anymore when they are part of a seminar. Even the much-cited fat old Kempoka can do it. And here a hall full of mostly active karate trainers, most of whom obviously have never been on the subject before.

Unfortunately, this has now continued. An eternal wobble in the following two or three basic litters. No stance, no body center – the instructors had no chance to teach from their repertoire, since the basics already presented the participants with real challenges. Joachim and I made the best out of it and started to practice our own thing and spice up the different techniques with suitable stance heights or following movements. Soon we were not only our black suits because of exotics. Afterwards we had 15 minutes for us, which Joachim showed me the master forms of Kempo. My highlight of the weekend! 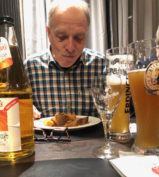 Hm. Dinner and bed were then okay.

Shotokan, what are you?

The second day continued almost seamlessly from the first. Kyusho with Achim Keller (8th DAN Shotokan and Kyusho expert) should be mediated. But first the kata “Matsumura Passai in the probably oldest preserved variant” was shown and “taught”. Since I know neither the current nor the old form of this Kata known in the Shotokan, the following one and a half hours were maximally uninteresting for me. But admittedly: the form looked great. And many of the active ones were also able to follow here. The Shotokan people. Next to us some sympathetic Goju-Ryu-Karateka from Münster also made faces and fumbled through the movements with us. Actually, I would have liked to stop now and only take pictures. But come on, maybe something else came.

Checked off, now it was Kyusho’s turn. What did this have to do with the ancient kata? Or any elements, Eurasian or not? Nothing. But what the Kyusho master showed then were attack points with which I can scare 14-year-olds at most in my training. Since they were often brand new for the colleagues in the white suits, they were practiced with changing partners. We stuck to the Goju-Ryu colleagues and got this part around.

But is “getting around” the purpose of a two-day seminar, which is not quite inexpensive and very time-consuming? Already during the second day the thought came to me that I was actually completely out of place. Not because I am such a top athlete myself or the other Shotokan Karate players are so bad. But obviously the sports-oriented training to become a Shotokan DAN is so completely different that it is no longer compatible with (my) Shaolin Kempo. I’m sure there were quite a few really good athletes in the hall with me. Only few of them showed it. All the things I expected, i.e. deeper input in bodywork, new insights into movement principles and an exchange of the different styles at eye level, did not take place. What should the other instructors show me, when most of the participants already found basic techniques a challenge? I trained Escrima with Tuhon Kit Acenas, Wing Chun with Sifu Jefferson, Silat with the legendary Faustwerkstatt and also with Maul Mornie, Kobudo with Frank Pelny. But always in their groups, with all the cracks and experts, among whom I was the goofball. But here I felt like the one-eyed man among blind people. Thoughtfully, I left the hall. 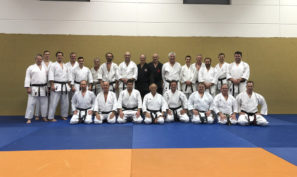 On the long way home, the decision was made to break off the seminar. I had been to so many seminars, and there was always something I could take with me, a movement, a technique, an attitude, something. But this weekend I only took with me that Shaolin Kempo and Shotokan do not get along at this level. It certainly wasn’t the speakers, probably because of my false expectations.
Too harsh a judgment? I hope so. I hope that my next encounters with Shotokan-Karateka will show me that my assessment is completely wrong. Until then, I will continue to practice Shaolin Kempo and the principles behind it. 🙂 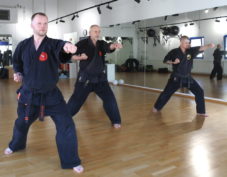 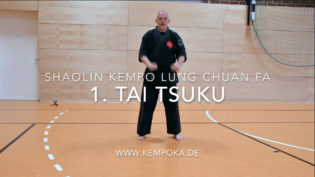