It’s right before Christmas. What could be more natural than to give yourself a present during this time? I did. Namely with an invitation to Olaf Bock to come to a seminar at the small Kalletal. And he came!

Actually, Sensei Olaf has the gypsy life of the martial arts teachers over. “I don’t want to spend my weekends dabbling in world history and seminars.” For many years, the Kempo master was active at home and abroad to bring his idea of Kempo and his knowledge to men and women or to take care of the development of suitable organizations.
Obviously he could not resist my charm. ? So he actually stood in our small hall in Hohenhausen on a wintery Saturday at noon. Without reindeer and parcels, but with lights in his eyes and an obvious desire to teach. 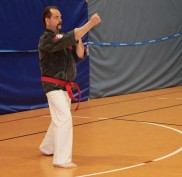 I was particularly pleased with the encouragement from Kempoka, because at the same time belt examinations were taking place in the Seibukan, which certainly prevented the majority of those interested from participating. Stupid appointment situation, but unfortunately impossible to prevent just before Christmas.

But besides the direct students of Olaf, i.e. Thomas and Thomas from Bad Bentheim and myself, my silat teacher Niki, my partner Andreas, my student Klaus and Kempoka from Schieder and Bielefeld were also present. A small, fine and almost exclusively black-belted troupe, who could shine with a lot of expertise themselves.

Olaf began as Olaf always begins: elementary school. And whoever thinks that I am the only one who sometimes finds it difficult to perform a la Shorin Kempo Ryu – hihi, I’m not! Olaf had a lot to do, a lot to explain and to correct again and again. And not only with me, but also with my colleagues to the left and right of me.

While this is now a welcome detail work for me, which brings me much further, I was curious about the reaction of the other Kempoka. But out of the corners of my eyes I only saw bright eyes and inquisitive faces. Was it because of Olaf Bock’s charisma, his sovereignty or the spirit of our troupe? In any case, even proven experts were corrected and pointed out alleged incorrect postures or positions. Anything but the usual, because higher graduates in particular are often no longer prepared to accept new influences. But the participants of our seminar were not here to show the belt, but to really learn.

This continued with the following units. Much to my pleasure, Olaf with the Long Kuen packed the next present under our imaginary martial arts fir tree. In Lung Chuan Fa we know the kata as “1st master form”. Nonsense, according to Olaf. Master forms never existed in classical Shaolin Kempo. The Long Kuen is a sword form for butterfly swords. As practice, it was run unarmed. And so it developed a life of its own, became its own “master form”. However, in many cases it was heavily modified and simplified.
So let’s get to the good part. Since the Lung Chuan Fa-Kempoka are familiar with the form, we could concentrate on the details. The hand position, the lifting and lowering, the breathing and the position of the pelvis in particular are important elements that really make the Long Kuen stand out. Plus change of pace. In order to really “master” this form, some drops of sweat will have to flow.
We left the sabers out completely, because with the heavy axes the form changes again and becomes even more difficult for those who have not yet practiced sai or butterfly swords.
Over and over again we ran the form. The temperature in the hall increased continuously. “There is no break”, Olaf grinned. And again, and again. But everyone held out. 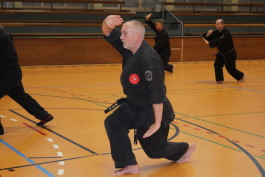 Then to be happy about the next candle on the tree, namely the Ch’uan Fa Kuen. The second of the classic Shaolin Kempo Kata is much longer and a whole lot more challenging in terms of technique than the still quite short Long Kuen. Several single components of it are taken up in the Lung Chuan Fa in our “4th TaiTsuku”, but numerous other elements were unknown to us.
Been, because Olaf first led us step by step through the Kata, in order to let us practice it gradually with expression, changing tempi and tension/relaxation passages.
The Ch’uan Fa is really a board, because it combines quite a few of the Shaolin Kempo principles. Changing stance heights are actually frowned upon in classical Shotokan Karate, but in Kempo inspired by Chinese Kuntao they are explicitly required. In addition, the wide turning in when the punch is made, or the back and forth of the upper body in defense and attack. There are many things we are unaccustomed to and have to learn anew.
What inspires me is the closed teaching system, which is reflected in the forms. Everything has hand and foot (also in the figurative sense), nothing seems to be put on or sealed to it. Patiently Olaf explained questions, skilfully he illustrated the meaning of this defense or that attack.
After a good two hours finally a short break. It was necessary, but short. Because after another round of Long Kuen and Ch’uan Fa we went to the long pole. In Japanese Bo, called Gun in Chinese. Olaf briefly explained the structure of the teaching system in Shaolin Kempo. Five single Kata, which actually belong to a total form and were only divided into six parts for teaching reasons. In addition ten Bo-Kumite, i.e. partner exercises with arranged attacks and defence. 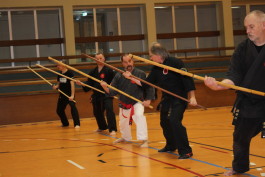 Then it went to the first of these Bo-Kata. And also here, where we actually practiced in the Lung Chuan Fa, it was again about details and executions, which are new for us, combined with sequences, which were unknown to us. Impressive, with which looseness Olaf handles the Bo. The master is not the kind of Important Important, who chases his students with a big belly, but with enthusiasm and verve.
After a good three and a half hours, Olaf Bock presented his gifts. Thomas Kuclo presented the remaining four Bo-Kata at the end, Olaf himself gave a preview of the halberd form he taught, and then we were done. And inspired. Because what comes after the presents? Right: the unpacking. And the longer you have to deal with it, the more beautiful the presents are. It will take months to process all the details.
On this note, many thanks to Olaf Bock. And many thanks to the participants of the seminar, because unpacking alone is much less fun! 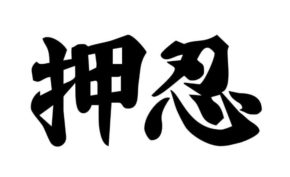 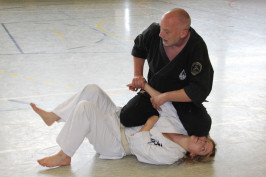