The Bo is the ultimate all-purpose weapon in Kobudo, but also in Kempo. Therefore, it is worth taking a closer look at the long pole.
In general, the bo is an excellent training tool. And that even if you do not plan to knock him on someone’s cap.

Because whirling and handling the Bo trains muscles, joints and coordination enormously. However, this is also the reason why the Bo has little to do with children’s training. On the one hand, there is a great danger that the cheeky young fighters will smash the thing around each other’s ears, and on the other hand, it puts a lot of strain on the joints in the hand and arm, especially at a young age. Therefore, I am of the opinion that a bo is not a beginner’s tool for kids, but should be practiced only starting from about 10 to 12 years (exceptions prove the rule, of course!).

However, the slim thing also cost me a lot of nerves. Although there is actually nothing mysterious about the slim wooden stick, the artful handling of the wooden device is a science in itself.

This already starts with material and lengths. In Kempo mostly rattan bo are used. They bend and bob when used. Many Kempoka want it that way, because it increases the whip effect when such a rattan stick hits an obstacle with momentum. But it only works if you lock in the end position fairly accurately. I’m now busy for more than ten years with the thing, but my bo can not really be set in vibration … As I said: This trains the accuracy in the movements enormously!
But it can also be that my Kempo-bo is made of bamboo. These bo are significantly more rigid and somewhat heavier. Spring they do also, but just significantly less. Disadvantage of the woody grass stem: bamboo splinters when broken, while rattan only shreds at the ends. You can recognize bamboo by the growth nodes or rings, rattan grows with long fibers. 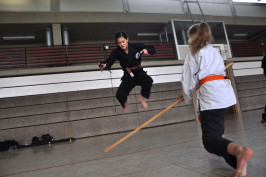 In classical Okinawa kobudo, bo made of Japanese oak are used. They are much heavier, a whole lot harder and naturally do not bounce at all. On the other hand, when properly controlled, they smash everything that gets in their way. Exactly the right thing for our Okinawa kobudoka, who are trained for final combat. By the way, they don’t call their long stick Bo, but Kun. This is derived from the Chinese gun, which also means stick or club.
We also use such an oak bo, but mainly for training purposes. Two or three times our 2nd Bo Kata run with it, then muscle ache is guaranteed …

There are rules for everything, so also for the competition in Kobudo. The stick here should or must be made of oak and must not weigh less than 900 grams. This eliminates the show bo of our YouTube experts, because they are much lighter to allow all the whirls and tricks. On the other hand, they wouldn’t last long in contact with the enemy. By the way, there are also experts who use metal bo. However, they are not practicing for the sport! 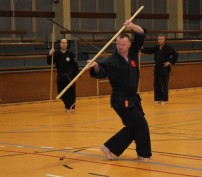 The right length is also important here. Rule of thumb: a “normal” bo should be two fist-widths longer than you are. Traditionally, the Japanese bo is about 182 cm long, which is equivalent to six feet. This is where the name Roku (6 feet long) Shaku-Bo comes from. Since I am a little longer than the Japanese yard measure, I had some bo made from ash in my length for kobudo training. Ash is also very hard, but a little lighter than oak. When you handle the bo for hours, however, this is not an unwelcome side effect. But some techniques, such as stitches, don’t work properly if the bo is too short. Important for children: the bo must not be too long either, otherwise the technique of the growing martial artist suffers. And once the movements are wrong, they are very difficult to get rid of. So get the saw out and get the thing off!

There are bo in all possible lengths. The shortest are called Tanbo, are about 60 centimeters long and correspond to the Filipino Escrima sticks. The 120 centimeter long Yon Shaku Bo is known to our colleagues from Hsinshi Kempo as Jo, it is their standard weapon. The longest are about 274 centimeters long and require their own unique techniques to master. The paddle or oar, called eku, is also among the bo weapons. And bo with attached metal and bladed weapons, such as naginata, yari or manji nunti Bo, are also classified as bo. No wonder, since all of them are one-piece pole weapons whose handling is quite similar. 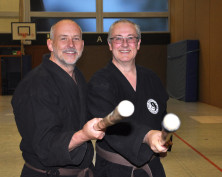 There are completely round bo and those that are tapered at the end. The conical shape is also used in Tesshinkan Kobudo and has several advantages:
– the bo whirls faster, because the air resistance at the ends is lower
– the ends are the hitting parts. The smaller they are, the more energy is released.
– if the opponent grabs or wraps around the bo, the conical shape is easier to release
– if the conical bo hits an obstacle, it is more resistant and does not break so easily
There are also four-, six- and octagonal bo. These are harder to grip, but hurt even more when they hit with their edges. Most Japanese bo are about three inches thick. In Tesshinkan Kobudo, conical bo are used, which are only about 2.5 centimeters thick at the ends.

The tips of the bo are called saki (tip) or kontei (end). The thicker middle part is called moto. 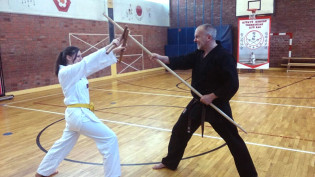 Standard Bo made of rattan or white oak is already available for about 20 euros. If the harder and heavier red oak is used, one must calculate around 30 to 35 euros. The noble variants directly from Okinawa Shureido BO tapered Ø 3 cm / 2.3 cm, oak wood strike with about 60 euros. If you want a tailor-made long stick, you will find it at the carpenter around the corner. Even better are woodturners or stair builders, who can also give the continuous rounding a conical pizzazz. There it is necessary to negotiate the prices.
It is good if the bo is untreated. It is better if it is lightly oiled. It is quite bad if it is varnished. It looks fancier at first, but after several hours of training with contact, the varnish layer is ruined and the palms of the hands are also ruined, because they are now guaranteed to have thick blisters! 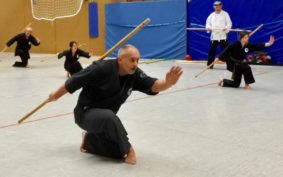 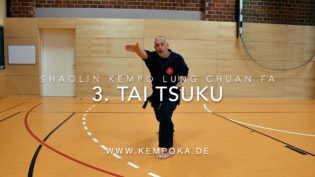