Family gathering with stick – Kempo meets Silat. More than 35 martial artists, three high-ranking speakers, two fascinating martial arts styles – that was a mega event last weekend in the sports hall in Hohenhausen. Kempo meets Silat was the motto, to which active people from the whole region and even from Wiesbaden came to the small Kalletal. In the luggage the long stick, because that was the underlying theme of this seven-hour double course.

The background of the memorable seminar were my encounters with the different ways of dealing with the wooden device. Of course with Kempo, where we have intensive contact with the natural CO2 reservoir. Then the courses with Frank Pelny, which gave me intensive insights into the Japanese way of handling the bo. And of course in Silat, which can also skillfully hit each other with the long pole.

And since I was in the paradisiacal situation that the halls were open, the corona numbers were low and friendly speakers were willing, I gave myself a great seminar. Although without Sensei Pelny or a representative of the Japanese Kobudo directions, but with the Silatmasters Niki and Marcus from the Detmold fist workshop and Sifu Olaf Bock, who represented the Shaolin Kempo direction and thus the Kuntao-inspired variant of Bo. So much is betrayed in advance: For an intense muscle ache these two styles were by far enough.

Together again at last

On Saturday, the usual nervousness of the host: Will everyone come? How many will there really be after the long Corona break? Are the speakers not only healthy and lively, but also on time and in a good mood? But very quickly all the worry lines disappeared. In fact, well over 30 martial artists from Lemgo, Detmold, Paderborn, Leopoldshöhe, Rinteln, Melle, Nordhorn, Bad Bentheim and even from far away Wiesbaden arrived and greeted each other. It was clear to all how relieving it was to finally practice martial arts together again on a larger scale, completely regardless of the style and rank of the participants.

Short welcome, then it started with the first unit. The stick in Silat Suffian Bela Diri, the Silat style of Niki and Marcus. The two briefly explained the historical peculiarities of Indonesian-Malay handling, the situation of fighting on the battlefield and the distinction from the duel situation, as it is usually assumed in Japanese or Chinese styles. From this the two experts developed basic techniques, peculiarities of the grip and the resulting handling as well as peculiarities in the footwork. Very quickly they had their audience under control and fascinated with ever new drills, which were then mostly deepened in partner exercises. Footwork as the basis of each technique, plus pivots of the body around the wooden pole, lifting and lowering to enhance the effect – the sweat flowed not only because of the often unfamiliar movements, but also the concentration on the handling of the long stick. Some of the participants were old hands at the long stick, but there were also complete newbies who did not know how to use the long stick at all in their home schools.

But since the partners changed again and again, the different knowledge was soon no longer a problem at all. And the teaching method in drills instead of fixed sequences, also often unfamiliar to the representatives of classical martial arts styles, once again proved to be a unifying element. Soon the hall was filled not only with panting, sweating and concentration, but also with mutual consideration and respect for each other. The wooden Bo can be a stern taskmaster, quickly punishing mistakes with bruises or more severe bruises. But on this Saturday, there were no injuries worth mentioning; everyone had themselves and their bamboo, rattan or oak implements well under control and their partner in sight.

Olaf Bock, Grandmaster of Shaolin Kempo, then began after the short lunch break. He also briefly explained the background of the Bo or Gun, as it is called in Chinese. And already it went into the first basic techniques of punches, blocks and whirls. Now the ladies and gentlemen from the Silat department were very concentrated, because at first the changed grip position seemed completely unfamiliar. But quickly everyone had the knack in the truest sense of the word. And when Sifu Olaf then showed and practiced the first partner exercises, everyone was again in their element. Once again it became clear that the historical roots of the two martial arts, which at first seem to be so different, are close to each other. As a result, even the experts of Silat quickly found their way in what was initially foreign terrain.

One last short break, then Olaf Bock proceeded to show and have the students practice one of the classical Kempo forms with the long stick. He chose the fifth and last of the Shorin Kempo forms, which includes numerous grip changes and turns. Again, it was fascinating to see how quickly the Silat faction was in their element. Actually, the active members of Silat Suffian Bela Diri do not know any fixed kata at all, but since the basic dynamics of the long stick are so similar, the sequences were no problem at all for all of them.

After a total of almost seven hours, both units were completed, liters of sweat shed, many new impressions gained and old and new friendships made or deepened. And the Budo SV Kalletal had once again shown itself as a small but fine center for dealing with the long stick. Only the unavoidable muscle ache, all active had to fight out after all the effort each for himself. 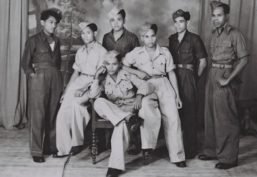 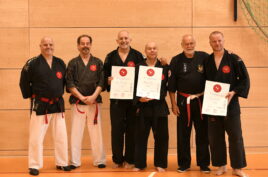