The 3rd DAN – September 25, 2021 will remain in my memory for a long time. Because on that day our teacher Olaf Bock took both my Kempo friend Thomas Kuclo and me the examination for the 3rd DAN. And this examination had it in several respects in itself.

The preparation was intense, hard and above all long. After all, since Corona began, we have hardly been able to train directly with our students, apart from individual opening phases. But thanks to the commitment of our club management and the goodwill of the municipality, we were allowed to use the local sports hall to teach online from here and record accompanying video footage. And anyone who has ever stood in front of a camera knows that you are rarely satisfied with the results. So I spent countless hours alone or just with my partner Andreas training, training, training and then recording, then reviewing, discarding everything and re-recording again.

Andreas was preparing for his 1st DAN. My own exam was not at all at the disposal at first. But the exam was postponed again and again due to the pitfalls of Corona. I still went at least once a month to train open air with Sifu Olaf. Only in the spring of 2021, the pandemic events allowed the first cautious relaxation and thus joint training. Finally together again in the gym. That had to be celebrated. I have more ideas for joint trainings than we can realize for the rest of my martial arts life. An essential drive of my activities is the search for commonalities and also separations with other styles. What could be more obvious than to organize a long stick seminar for Kempo and Silat? The seminar was the hoped-for hit (read here).

But unfortunately there was an unpleasant side effect. Our sports friends from Wesel, who are actually available for any idea, distanced themselves from our activities in an unusually brusque manner. Reason: They think that they cannot recognize our teacher Olaf Bock and thus do not want to visit any event with him. Of course, they are free to do so. But they insinuated Olaf Bock that he wants to cheat his way into the DKV via our event. Well, on the one hand, this is absurd nonsense, because Olaf withdrew from all the association talk some years ago and doesn’t want to have anything more to do with it. On the other hand, this put Andreas and me in the unwanted situation of having to show solidarity with our teacher. Because one thing is clear: I have found my teacher in Olaf, who has shaped me in Shaolin Kempo quite decisively and will continue to shape.

With that, it was clear that a decision was pending that had been in the air anyway: How was I going to do my own DAN exam? Regularly, it would have been my turn in April 2022 after the break between DAN exams prescribed in the DKV. My tendency was to face two examining boards at once, as it was clear that DKV would not accept outside examiners and especially not Olaf. Who knows why not, because what does an association gain from not allowing outside expertise into its ranks? Especially when the number of Kempoka within the DKV is so small that even examiners from outside the style would have to be present in order to be able to approve a higher DAN grading. Well, it was clear in any case that my teacher and mentor must take the 3rd DAN from me anyway, because only he can judge whether there has been any further development in my Kempo.

Because of this situation, I decided to thankfully do without a DKV examination. Why the double frippery? The assessment of my teacher is decisive for me. If a federation or its officials no longer represent the interests of their active members, but retreat to rules and recognitions and believe that this action has a positive and motivating effect on others, then an examination in this environment is not my first choice. Andreas spontaneously echoed this opinion. But since Andreas now had to wait so long for his exam for 1st DAN, Olaf unceremoniously set the date for September. And so Thomas Kuclo and I were also “on” with our examination for the 3rd DAN. In for a penny, in for a pound.

An examination with Sifu Olaf Bock – that was a premiere for us. What did the Grandmaster want to see? We had trained almost exclusively forms with him in the last year and a half. We could also show them. But our ancestral examination programs are still composed of parts that were created long before our meeting with Olaf. So the announcement came from the master: Leave them as they are. Show us the Kumite and the weapon forms that you have in the program. And so that this is aligned with the program of Kempo friend Thomas, I reduced the number of techniques / Kumite to 10/40, so a total of 50 Kumite. The topic self-defense was not one for the exam. Because Olaf represents exactly my opinion: memorized alleged SV sequences are nothing else than new Kumite. SV is spontaneous and hard. Who practices forms and Kumite sufficiently, has the equipment for self-defense. Who can not defend himself with it, has not practiced forms and kumite properly ????.

After I twisted my knee before my 2nd DAN exam and only got through the exam with painkillers, the cold that hit me two weeks before and that I couldn’t shake off was a piece of cake. But it was still a nuisance, because it meant that the final spurt of preparation was involuntarily cancelled. And also the condition suffered. How much, I should still notice …

Besides Olaf we had the honor that our friend and master Herbert Zielinski (6th DAN Shaolin Kempo Hsinshi) looked us very closely on hand and foot. And next to the old master from Gütersloh a real Kempo veteran arrived: Roberto Tundo (7th DAN) from Arnhem is not only a close friend and long-time comrade-in-arms of Olaf, but also the not-so-young son of his father Camine Tundo and thus directly connected and known to all Kempo greats of the first hour.

With power and (without) puff

The exam itself was then … let’s say “challenging”. Only the query of the basic techniques, the Kihon, lasted good 45 minutes. Basic school at a DAN exam? Yep, Sifu Olaf is of the opinion that also the DAN candidates must show where the frog has the curls, no matter for which DAN degree. After that Andreas could rest a little bit, because he had already done his actual exam three weeks before during a training.
For Thomas and me it was now really challenging. Now it was our turn individually. Each of us first had to run the 6 Sifat slowly, then at our own pace. And finally the Sifat as a long form, also individually and then briskly. That makes 14 form runs. And who thinks that a slowly and concentrated executed Kata is not exhausting, is cordially invited to the training. After that it was the turn of the Kempo forms, i.e. Long Kuen, Ch’uan Fa Kuen and Tasi Yoti. Again slowly and then at my own pace. For a short time I actually got some circulation, could only see and hear badly. Darn cold!

But that was by no means the end, because now it was Thomas’ turn to do the 5 Bo forms of Shorin Kempo, for me the 3 Bo forms of Lung Chuan Fa. Same game – first slowly, then briskly. And finally the Long Kuen as a weapon form, sometimes with Sai (Thomas) or with butterfly swords. Meanwhile almost three hours were over and we had 28 or 32 Kata behind us.

Instead of taking a breather, we now went to the Kumite. Here we showed different versions, because both Thomas and I will only go to the Shorin Kempo Kumite in the future. We are still with our “old” versions. But this did not detract from the intensity. Our partners, Thomas Barkemeyer and Andreas Roß, had to hold out now and were worked on properly. Sorry guys, for the bruises! ????
After four hours, our examiners had seen enough. Although our examination programs are even more extensive, Olaf, Roberto and Herbert didn’t want to make a technical query out of our examination, but rather check whether we had accumulated enough knowledge about what we were doing.

Obviously yes, because we both passed. Together with Andreas, we received our certificates, completely flabbergasted. And honestly: The next exam can still be a few years away, because this one really took it out of us! But at the end of the day, a new stripe is embroidered on the bib and we can set off for new shores! Sabers are on the wish list. And Kumite a la Shorin Kempo Ryu. And Bo Kumite … the learning just never stops! 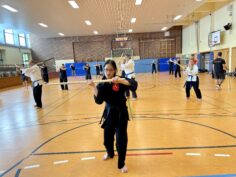 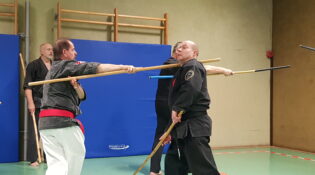