The “older student” is called Sempai in Japan and Si-hing in China. However, one should not imagine the meaning here and there as we know it from school in Germany. There is much more behind Sempai.
In classical martial arts schools almost everyone is an “older student” for a beginner, after all he himself is still at the very beginning of his skills. With increasing knowledge and skills the student slowly becomes an “older student” for the following beginners.

Quite a logical number. But in the Asian cultural circles the “older” is generally held in immense esteem. And out of this respect the importance of older students and teachers in the martial arts is fed.

Now we live, thank God, neither in Asia nor in other, warlike, regions of this world, where such a strict hierarchical thinking is demanded. But since the occupation with kicking, throwing and punching is not only a purely sporting activity, but also requires a lot of discipline and self-control, the term “respect” is not at all wrong. A trainer in martial arts can be more than a mere “coach”, i.e. a trainer of exercises. He can (should) also be a bit of a role model when it comes to practicing his art. Because if such a “trainer” is a dubious bird, who “distinguishes” himself by bad manners, exaggerated brutality or harsh tone, then one can be quite sure that also his students tend rather in this direction. There are plenty of examples of this, you don’t have to travel far for that.

With my brown belt exam I slip directly into the role of a sempai. Because after Witalli and Roman moved to Münster and Paderborn, their successor Flo, who is no longer able to lead the training regularly due to his education, is also leaving us. And so in the future Ella, Uwe and I will be responsible for the physical training of small and big Kempoka.
First of all, this job is fun, because teaching is something I enjoy in general. And apparently I also have a knack for teaching Kempo to men, women and children.
But on the other hand everything is changing: training is no longer a “can” but a “must”, because suddenly I have students waiting for me who have a right to be taught. And to good instruction. And that every evening, not only as a substitute. So I need training schedules, plus new ideas on how to make one and a half or two hours attractive. The internet is a great help for the beginning, but Uwe and I have also registered for a trainer course to get more information about training.

So, if you think that an “older student” can make a big deal and the wisdom is already spoon-fed, you have cut yourself. Learning is only just beginning! By the way: Of course, the own training will be neglected for the time being. But I guess everyone who is responsible for a group shares the same fate …
It’s just good that I’m not alone in this responsibility, but that I’m designing the training together with Ella and Uwe. Sabrina and Kim are still strengthening our small group, so it should be possible to bring a good training to the dojo for the next years (yes, that’s the perspective!)! 🙂 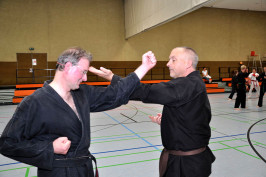