Kempo in the Karate trap

Kempo in the karate trap – what is Kempo? More precisely, Shaolin Kempo. This question becomes more and more exciting for me. The more I try to get closer to the origin of our martial arts, the more Indonesian I get … 😉

This has a lot to do with my “second job”, namely silat, which I have been doing for several months now. And my teacher there, Niki Sandrock. As already mentioned, he is not only an excellent Silat-knowledge-transmitter, but also has profound experiences in Filipino stick fighting styles and especially in Shaolin Kempo, exactly in my style, the Lung Chuan Fa Kempo. And as we both found out very quickly, we are dealing with very similar questions. The only difference is that Niki is about ten years ahead of me in terms of time and light years of technical skills. 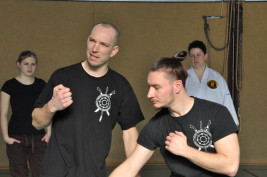 It is generally assumed that the roots of Kempo “somehow” came to us from China via Okinawa. The Japanese names of the techniques, the etiquette and also the name strongly suggest this.
It is also known that our “Shaolin Kempo” is a mixture based on two persons, Meijers and Faulhaber. Both from Holland, long time quarrelled, quite different in the execution of techniques.

I myself have been hampeeling in Kempo for a few years now. In order to improve my modest skills and to find out more about the roots of Kempo, I have studied Okinawa Kobudo, among other things, and have also been allowed to gain an insight into Shorin Ryu Karate. All of them are absolutely great systems, especially the vibrating hip as a principle of movement is very impressive.

But unfortunately it doesn’t really fit into Kempo. Our Bo forms, for example, are completely different and almost incompatible with the classic Okinawa Kobudo.
And on top of that we have our own style of Kata. They are not called Pinan or Heian or Naihanchi, but Saifa or Sifat. And they are also methodically structured completely differently.

For some time now I have been practicing Silat additionally. And somehow it “feels” much rounder when I think of Kempo. But even here there are clear contradictions. For example, when silat people do Tai Sabaki (Gellek), they are in balance with a 50:50 weight distribution on both legs. At the moment my “Kempo feeling” always brings me into a Kokutsu evasive movement with weight on the back leg. Sounds trivial, but it stands in the way of all subsequent techniques and is therefore simply wrong. And this is just one example.

So what, you might think now. It’s your own fault, why are you doing it in other styles, they just do it differently.

But if I look at the origin of the two “ancestors” of Shaolin Kempo, they are Indonesian/Malayen. They are soldiers of the Dutch occupying forces in their old colonies. When they moved to Holland, they opened their martial arts to foreigners as a business idea and started to teach them. And in order to be more compatible and successful, they resorted to Japanese names. The first one who taught our Kempo in Europe was the Indonesian Carel Faulhaber, who was 1st sergeant in the armed forces of the Dutch occupying army. He brought his family style “Kuntao Matjan” with him when he and his relatives left the former colonies and settled in Holland. Kuntao Matjan is described as a mix of Chinese Kung Fu styles and the Silat of Southeast Asia. Faulhaber began to teach his martial art outside the family.

Now that I know that in Southeast Asia the tradition of family styles and secrets is still very important, I ask myself: Is all this alleged legend about Kempo from Shaolin China and Okinawa maybe quite nonsense? Isn’t it much more likely that “our” Kempo is based on exactly these Indonesian/Southeast Asian fighting styles? And that our orientation towards Karate and maybe even KungFu (Chuan Fa) is going in a completely wrong direction?

The Southeast Asian cultures from the Philippines to Malays and Indonesians have also achieved considerable civilization levels long before the Europeans, although not as dominant as the Chinese. They didn’t even need to have the Chinese show them how to bash each other’s heads in.

Why does that move me? Because I notice that our Saifas and our whole style somehow doesn’t really harmonize with the Japanese mainstream of the last 100 years.
And if I generally consider kata to be the fundamental basis of a martial art (and I do), then I am barking up the wrong tree when I try to perfect Japanese stances and movements. The whole one-hit-and-death thing doesn’t really work for Shaolin Kempo.

Then I should consequently try to discover more silat elements. And I would have to find out more about Faulhaber and his family style Kuntao Macan. Let’s see what else there is for Kempoka in the Netherlands, who might have a more original approach to the sources of Kempo. In any case, Gerald Meijers and Carel Faulhaber separated again in 1965. Meijers further developed his skills towards Japanese Karate styles, especially Kyukushinkai. Faulhaber’s three sons continued to teach the talented martial artist for some time. Even today, there are schools that see their roots in these people. 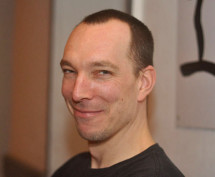 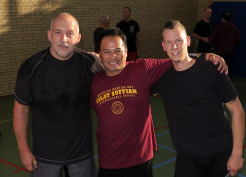